As we head into week nine of the football season, we have a clear picture of the top teams in the Midlands. This week, there was movement in the top ten, with previously unbeaten River Bluff loosing to Dutch Fork. The Gators only drop one spot. That is because I still believe they are the third best 5A team in the Midlands right now behind Dutch Fork and Sumter. The other Top Ten loss was Camden to Fairfield-Central. Because of the wins from the rest of the field and the loss to a team outside of the top ten, the Bulldogs drop significantly in the polls. This week, they have a tough match up against defeending 3A Champion Chester.

Founder of SCVarsity.com. Nationally published recruiting anlayst witih 30 years of experience in the industry. His work has appeared in publications such as Athlon, Sporting News, The Recruiting News and Deep South Recruiting and he is the author of the best selling book, The Book On Evaluating Football Players.
@scvarsity
Previous Friday Night Feats: Week Eight
Next Midlands Class 5A Action: Week Nine 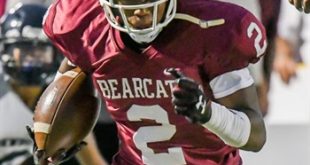